Together Ramon and Elba founded Templo Sinai in Montevideo, Uruguay, in 1996 with only 8 members. Today they have a church of 130 members that faithfully minister Jesus to the community through a number of compassionate outreaches, one of which is their ministry to 150 to 200 children from their surrounding neighborhoods every Saturday. There is a time of worship and Bible teaching for the children followed by a meal lovingly prepared by church members.

Templo Sinai is a giving church, helping to support missionaries in Spain, Morocco and the interior of Uruguay, sending teams to build, minister and supply clothes or appliances to meet the needs of pastors and their churches. They have also graciously received short-term teams of all ages from Mount Paran North for several years.

Ramon and Elba are experienced church planters and are training and discipling leaders to plant additional churches throughout Uruguay. 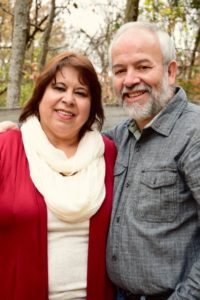 More about Ramon and Elba

Ramon and Elba Roldan were married on July 19, 1975 in Montevideo, Uruguay, after which they attended the Theological Institute in Chaco, Argentina, for two years. Upon completion, they began pastoring a church in Montevideo. Later they helped form the National Youth Department for Uruguay and were the first National Youth Leaders for the country. They have pastored several churches and have planted four churches including Templo Sinai.

Uruguay is on the southeast coast of South America and Montevideo, Uruguay’s capital, chief port, and by far its largest city, is in the southern part of the country. Eastern Montevideo is the fastest growing area of the country and only a small proportion of the middle and upper classes have had the gospel presented to them in a clear way. The middle class neighborhoods in eastern Montevideo hold the greatest concentration of unreached people in Latin America.