Gabriel and Margaret pastor Maranatha Church and oversee more than 200 churches that were planted by Maranatha Ministries since 1972. Their goal is to reach the unreached with the Gospel of Jesus Christ.

They take their 3,000-seat tent into a new area, preach and teach the Gospel and remain there for two to three months discipling the new believers until they feel they are well-grounded in the Word and growing in the Lord.

At this point they are able to plant a church and supply a graduate from their Bible school to pastor the congregation of new believers. The ministry provides ongoing oversight and training for both the pastor and the congregation.

They have grown and changed since 1972, but their vision of reaching the unreached and teaching the untaught remains the same. 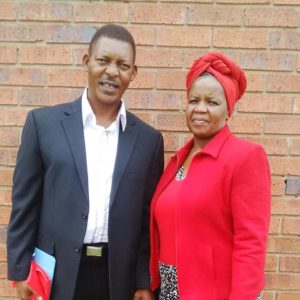 More about Gabriel and Margaret

Gabriel and Margaret both grew up in the church with a heart for ministry. Gabriel’s father, Shadrach Ntombela, began a church planting ministry in 1972, walking from village to village. When his father retired, Gabriel and Margaret assumed the leadership of the ministry.

South Africa is like two countries in one. The large cities like Johannesburg and Capetown are much like large American cities, but the bush and the small villages, to which God has called the Ntombelas, seem to be another country altogether, with no running water or electricity in most villages.