Kalzhan and Gulia Alimbekov have pastored The Church of the Living God in Gusev, Russia since 1996. Their church is a beacon of hope and life to the people of Gusev and the surrounding area.

They have raised up pastors and planted churches in Ozersk, Nesterov, and Krasnosnamensk and are seeking to plant churches in Kazakhstan and Kaliningrad.

The Church of the Living God ministers the love of God to the people in their area through evangelistic and humanitarian outreach to orphanages, shelters, a babies’ home as well as to the homeless, elderly and disabled. Through their internet radio ministry they are able to reach into many homes that would not otherwise have access to the Gospel. 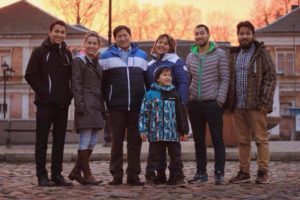 As a soviet army officer, Kalzhan moved to the Kaliningrad region in 1985. In 1988, he married Gulia. A few years later, after the miraculous healing of their first child, both received Christ and their lives were transformed. In 1992, Kalzhan left the military, remaining in Kaliningrad, and in 1993 he graduated from Bible college and was ordained as pastor of the church in Gusev.

The Kaliningrad Region is the western most region of the Russian Federation and is located on the Baltic Sea. The region is best known for its deposit of amber, but is also known for its oil, gas, and salt and is a well-known health resort area. Population of the region is 955,000, with Gusev being one of the five largest cities in the region.

The controlling spirit of religion