Marin began New Generation Church in 2001 with the vision of winning this generation for Christ and transforming it into a Holy Spirit-filled new generation that will take the message of the Gospel into their communities and the world. Since that time, they have been in a continual state of growth and expansion, moving into their new sanctuary in October of 2011; in time to celebrate 10 years of ministry.

They strategically disciple new believers and Marin and Atena pour their lives into training leaders who, in turn, raise up other leaders.

New Generation Church reaches out to the lost through their coffeehouse ministry, summer festivals, church planting program, Alpha courses, summer camps and many other evangelistic endeavors.

They are currently sending evangelistic teams into four locations that are their target cities for planting New Generation Churches. While their focus has been university students, they are now successfully reaching many in their parents’ generation. 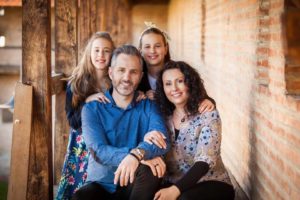 More about Marin and Bloj

In 1997, with his heart set on ministering in Bosnia, Marin heard God’s call to stay in Tirgu Mures and begin the strategy he had developed for Bosnia. In 2003, he married Atena who had become a Christian in 1999. She was working with East Europe Foundation in Evangelistic Ministries when they met and is now an integral part of New Generation Church and their ministries.

Tirgu Mures is a city of 165,000 located in the center of the Transylvania region of Romania and dates back to the sixth century. Industries include sugar, lumber, shoes, wine, and the refining of petroleum. There are three universities, including an outstanding medical school with 8000 students.