Benjamin and Mandu pastor the International Bible Church (IBC), also known as the Freedom and Restoration Center, in Monrovia, Liberia. Since their first church plant in 2003, the Tomahs have added five church plants, training the pastors and leaders under the guidance of their ministry through the International School of the Bible and Certificate in Ministerial Studies (CIMS); a school of ministry developed by the Church of God.

The International School of the Bible, a mobile discipleship training school, is one of the main thrusts of the Tomah’s ministry in Liberia. They have discipled and deployed men and women into the mission field to disciple others and plant churches through their discipleship school. 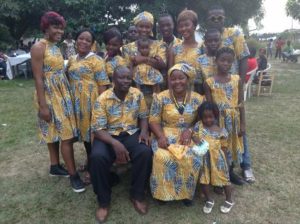 More about Benjamin and Mandu

While Benjamin was a public school teacher, they were involved in setting up and running Sunday school programs and cross-cultural church planting; not thinking about pastoring until the civil war began and he had to leave teaching. God called and they pastored a church from 1991 to 1994 when the civil war intensified and they were forced to flee into Cote d’Ivoire where they planted many rural churches. Upon their return to Liberia, they began IBC in Monrovia.

Liberia is largely a Christian nation by practice and history, but is surrounded by countries with stronger Islamic influence. Liberia could be used as a springboard for the spread of Christianity to the neighboring countries, the sub-region, and the highly-concentrated Muslim areas such as North Africa.

The controlling spirit of religion