Ali and Francoise, along with their four sons, moved to Meze, France, in 2016 to be closer to their ministry’s training center and the base operation of Channel North Africa (CNA).

CNA, founded by Ali, has grown out of the pioneering stage to a full satellite channel broadcasting 24 hours a day, seven days a week. The broadcast brings the Gospel to an audience of more than 50 million people in Southern Europe, North Africa and all of the Middle East in the languages of Berber, Arabic and French. They follow up on thousands of contacts each month from Muslims who want to know more about following Jesus, with many new decisions for Christ every month.

CNA launched a discipleship program in North Africa that has blossomed into a major church planting movement in North Africa and beyond. To date there are a growing number of church planters leading over 6,000 churches. Ali oversees and provides training for the pastors and leaders of these churches.

The Arhabs’ passion is to see more Kabyle Berbers come to Christ and be used to reach similar people groups across North Africa. 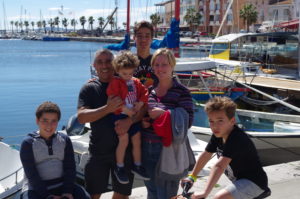 Ali Arhab grew up in a Muslim family of 13 in the Kabyle Berber people group of Algeria, an almost entirely Islamic country. It was in West Berlin, Germany, at age 18, that he first heard about Jesus Christ being the Son of God and dying for the sins of all peoples of the earth.

After several productive years in ministry, Ali left Algeria due to serious threats from Muslim Fundamentalists. In 1997, Ali and Francoise started a house church in Lille, France, where they pastored until 2016 when they moved to Meze, France.

France is the largest country in Western Europe and historically Christian, but like most of Europe, atheism is the common characteristic of the younger generations. Due to immigration, France is now home to 101 individual people groups, with over one-third considered unreached, including a growing Muslim population.

For more information on how to pray for France, please visit http://prayercast.com/france.html.

About Algeria and Tunisia

Both Algeria and Tunisia are hostile to Christians, making life very difficult for church planters and their families. Both countries are almost entirely Muslim and consistently appear on the Open Doors World Watch List of countries that persecute Christians.

Through Ali Arhab’s CNA Network, we are partnered with six church planters in North Africa. In Algeria, Rabah is planting a church and Mohamed is establishing three church plants. In Tunisia, we are partnering with Danny, Michael, Murat and Mijde in various towns and villages throughout Tunisia.

All of these church planters lead ministries that have a vision to share Jesus in every town within their reach. They lead their people to share Jesus, make disciples, develop leaders, form churches, minister to persecuted believers, and show compassion to the physically hurting. Ultimately they are looking to facilitate movements of God in the Islamic world.

Visit Operation World to learn more about Algeria and Tunisia.